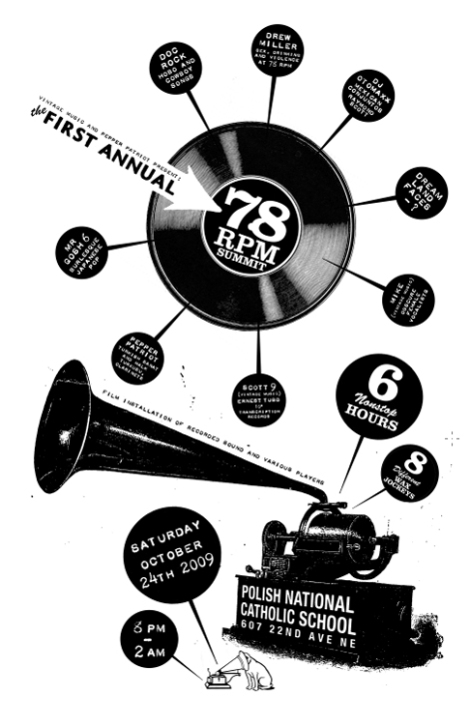 Listen to a radio show that featured four of the DJ’s.

The 78 RPM Summits were the idea of the Pepper Patriot, a 78 DJ in the twin cities, world traveler and sound artist. These were gatherings of a dozen or so record collectors who played old records on a variety of old machines. Most of the equipment was brought in by Scott & Mike from Vintage Music Co. They keep us all going with records, their expertise on repair and inventory of parts.

The posters were designed by Dale Flattum.
The films were shot by John Akre.

The video below is from the first summit. There is some nice footage of Doc Rock – may he have the rockin’est bones in the bone yard. He played a few songs about bums to start things off. Where else could the night go after that but down hill fast.

These events gathered fans, collectors and DJ’s together. The wide variety of music played was surprising, varied and great sounding too. The second event had many of the usual suspects showing up along with another crowd of younger folks just discovering the analog world. It must be the tubes and the smell of the grease in those old motors warming up. It is a pheromone like attraction that just pulls a certain person in. The first capacitors used in radios were coated in beeswax. Shellac records were made from billions of dead, spread, squashed, mashed, boiled, roiled, pressed and generally messed up Beetles. So maybe the pheromone attraction isn’t so far off.